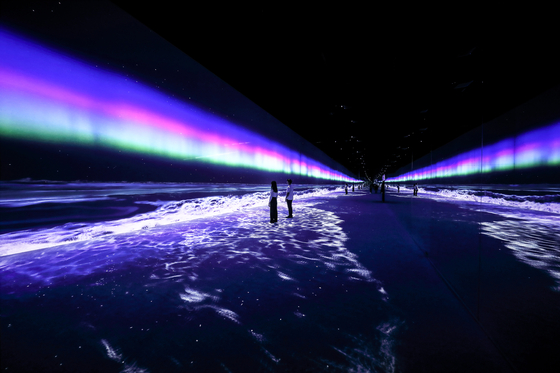 Media artwork ″Wave″ at the Arte Museum conjures up the image of a beach at night against a colorful sky. [D'STRICT]

SEOGWIPO AND JEJU, Jeju Island – Jeju Island has been proving itself as the island of art with the abundance of museums and galleries that have sprung up over the past decade.

More recently, newcomers to the island's art scene have been focusing on getting the attention of younger audiences with media art.

The Ministry of Culture, Sports and Tourism counted 19 modern or contemporary art museums in 2018. Since then, many new art museums have opened their doors, among which are museums that solely focus on media art or feature exhibitions mainly focused on such work. These media art museums typically have works projected not only onto the walls but on the floors as well that gives a sense of entering a whole new world filled with light. These projections also make ideal photograph backgrounds for social media posts.

The Bunker de Lumieres has been lighting up the eastern end of the island with the first-of-its-kind media art since November 2018, but now faces some competition. Arte Museum, which is filled with immersive media art, opened last year in September while the newly-built Podo Museum has set up camp west of Mount Halla, aiming to appeal to people who stay at the nearby Podo Hotel.

Arte Museum and Podo Museum are a 15-minute car ride from each other but take over an hour on public transportation so a taxi is recommended. Bunker de Lumieres sits on the eastern side of the island near the geographical landmark of Seongsan Ilchulbong so to enjoy each museum to the fullest, a two-day itinerary is recommended. 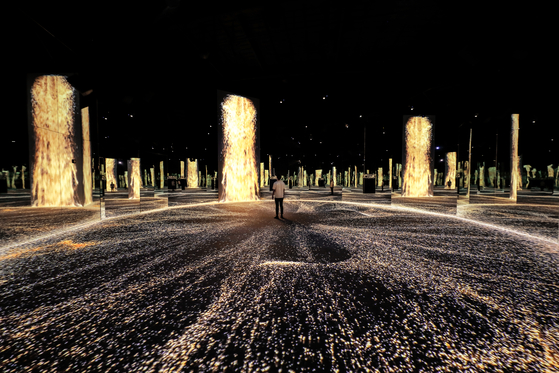 Arte Museum opened its doors on Sept. 30 last year, created by Korea’s acclaimed digital design company, d’strict. Its media artist unit a’strict earned critical acclaim for its public art project “WAVE” that lit up the huge wraparound LED display sitting atop Coex Artium in Seoul’s Gangnam District, southern Seoul last April. The group exhibited its work “Starry Beach” at the Kukje Gallery in central Seoul in August last year, using a similar wave image as the Coex exhibit but also using the floors and mirrors installed on the sides of the space to give an ever-expanding image of the space.

Arte Museum was funded by the Korea Creative Content Agency, which selects immersive art creators to boost the industry. The museum took over the building of what used to be a manufacturing factory, so looks like a giant warehouse from the outside, with only a small coffee truck parked outside the main entrance. Its humble outside appearance is deceiving. 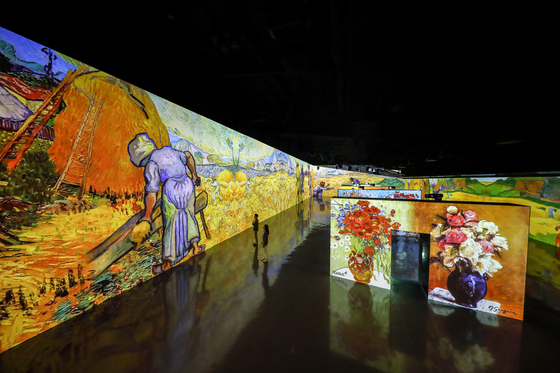 Arte Museum comprises 10 different sections each with a unique concept, taking up 4,600 square meters in total. Each section is a different media artwork. It begins with “Garden #1,” a digital reinterpretation of the landscape of Jeju where visitors can experience “the sounds of the Jeju wind while walking on a sunny forest path.” Other exhibits, whose titles are self-explanatory such as “Flower,” “Waterfall,” “Beach,” “Star” and “Jungle,” all use light, sound and mirrors to give a multi-sensory experience.

“Beach” and “Wave” are similar to the works that have been exhibited at Coex and Kukje Gallery, but the depiction of the sky in “Beach” is more colorful than in “Starry Beach.”

Of all the sections “Garden #2” is the grandest. The section is a vast exhibit with a height of 10 meters at some points. “Garden #2” displays the most esteemed works from Western art history from the Renaissance to the school of Symbolism. The high walls show classical works at a scale bigger than the originals and the whole space gives a majestic atmosphere of being inside a dignified museum.

Visitors can take the time to color in different safari animals and have them projected onto the “Night Safari” wall then pop down for a drink at the Tea Bar on their way out. The gift shop is filled with the museum’s goods as well as Jeju-themed souvenirs. 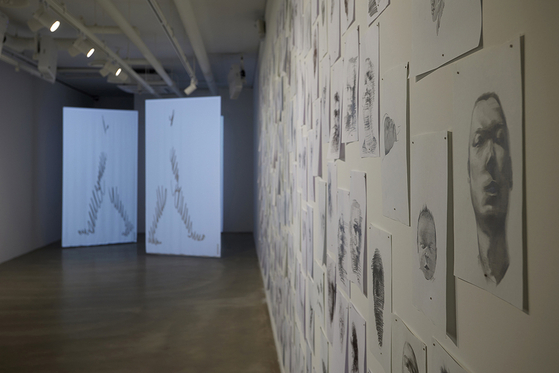 Illustrations by Seonglib show how people make judgments of others even when a minimum amount of information is given to them. [PODO MUSEUM]

Podo means grape in Korean and the hotel was given its name due to how the round-shaped roofs make the hotel complex look like a grape from a birds-eye-view.

For the honor of the very first exhibition, Podo Museum invited T&C Foundation, a foundation dedicated to educating children through culture, to hold “The World We Made” and “Käthe Schmidt Kollwitz — It is Spring, My Son” exhibitions until March next year.

“The World We Made” is part of the foundation’s “APoV” exhibition series. "APoV" is an abbreviation of “Another Point of View” and aims to look at the world from a different light. The first edition was showcased in Seoul last year.

“The World We Made” centers around the idea of hate and how it multiplies through word of mouth and eventually manifests through violence and war. Fifteen artworks by eight artists are on display along with some media artworks created by the foundation. Seonglib’s pen and pencil illustration series “not anyone” (2020), “scenes” (2012-2020) and “people I don’t remember” (2020) focus on people’s facial features, without other aspects such as clothes, skin color or gender, which easily become the source of prejudice and discrimination.

“It also points out how, despite having taken away all those things, we still ‘imagine’ a certain image of the people with these faces and how easily and willingly we fall into the mistake of generalization,” Seonglib said. 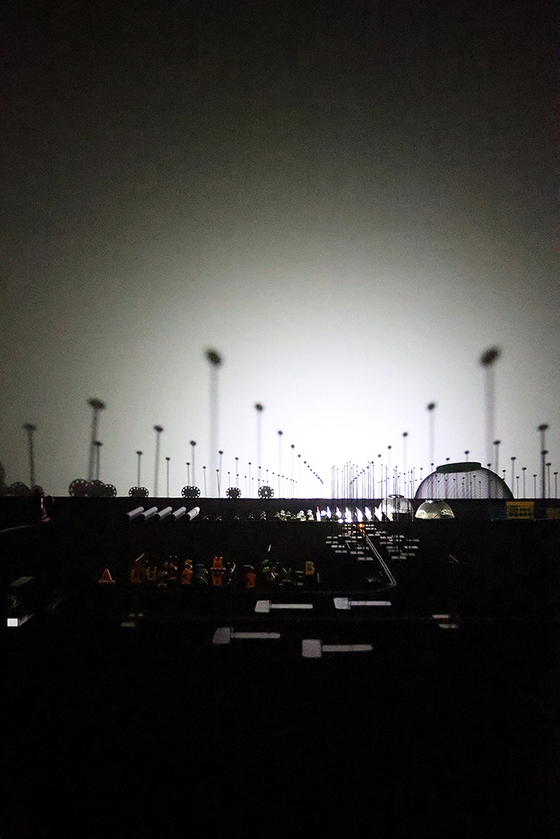 ″Lost#13″ (2020) by Kuwakubo Ryota shows the effects of a change in perspective. [PODO MUSEUM] 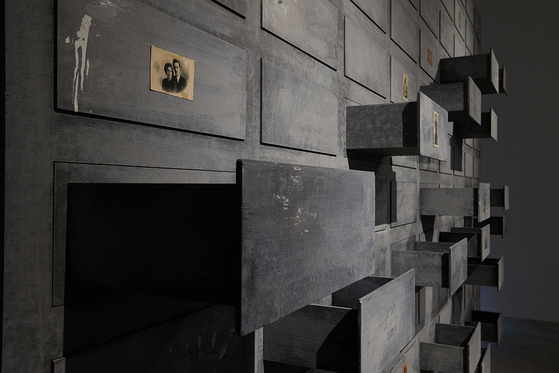 The ″Drawer of Memories″ (2021) by Zhang Xiaogang is on display at the Podo Museum for the exhibition ″The World We Made″ to show how memories pile up in our minds as if we're storing them in a drawer, eventually leading to the accumulation of history. [PODO MUSEUM]

“LOST#13” (2020) by Kuwakubo Ryota shows the audience how a different point of view can make the most mundane objects seem unreal. In a darkened room, a small train runs slowly around a track which is lined with everyday objects like tennis balls, rulers and clothes pegs.

A light on the front of the train illuminates the objects so their shadows appear as enormous architectural monuments on the surrounding walls. Famed artists Zhang Xiaogang, Kang Airan and Lee Yong-baek as well as younger artists such as Kwon Yong-ju, Zin Ki-jong and Choi Su-jin are all showing works at Podo Museum.

The “Käthe Schmidt Kollwitz — It is Spring, My Son” exhibition consists of 32 prints and a bronze sculpture by the German artist, who was born in 1867 and died in 1945. She lost both her son and her grandson over the two world wars, hence the three most dominating subjects of her works — death, war and motherhood. Her prints became a source of inspiration for the Korean Minjung Art movement in the 1980s, or the people’s art of social realism works. 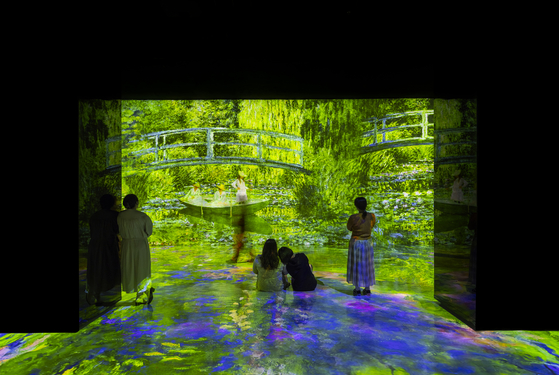 Bunker de Lumieres opened in late 2018 as the third edition of the “Amiex” exhibition series by French company Culturespaces. The Art and Music Immersive Experience — hence the abbreviation Amiex — takes place across 2979.15 square meters inside what used to be a secret bunker for communications company KT. It opened with an exhibition of media artwork featuring classic works by Austrian maestro Gustav Klimt (1862-1918) followed by works from Austrian artist and architect Friedensreich Hundertwasser (1928-2000).

Exhibits within the bunker change every year and the total number of visitors has already surpassed 1 million since it opened in December last year. In February, the exhibit’s local operator Tmonet announced that Seoul will get its very own Bunker de Lumieres this year within the Walker Hill Hotel and Resorts grounds in eastern Seoul. The two parties signed a memorandum of understanding and said that the museum will open by December this year. 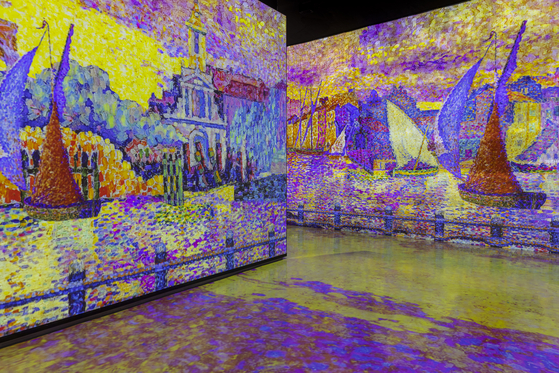 After “Monet, Renoir... Chagall,” a 10-minute animation on artist Paul Klee (1879-1940) will play. Klee was a Swiss-born German artist who is known for his colorful Cubism paintings that use simple shapes — mostly squares and triangles — to divide up the space like tiles and depict his subjects. Also known for his musical creations, the animation will feature his accomplishments in both the visual and auditory field.