Upon entering Kukje Gallery K3 in central Seoul, visitors will be engulfed by endless blue waves. The sea waves crash upon the wall of the black box space, making the visitors feel as if they are seeing the wave from a top view, accompanied with the roar of the sea.

The people who brought this multisensory experience titled "Starry Beach" into the gallery is a'strict, a media artist unit of digital design company d'strict.

The company uses digital media technology to create immersive experiences. It is best known for "WAVE," a giant digital public art piece featuring a crashing wave at COEX in southern Seoul, which gained international attention back in May. Shown on the largest high-definition outdoor advertising screen in Korea, "WAVE" was dubbed as the world's largest anamorphic illusion.

Lee Sung-ho, CEO of d'strict, said, "d'strict has been active in the commercial domain, combining art and technology. A'strict will continue to make artistic experiments autonomously and voluntarily using the accumulated knowhow."

Lee said "WAVE" also was a voluntary project of d'strict, which sowed the seeds of a'strict.

"The large-format outdoor display is mostly used for advertisements and other commercial projects. However, we thought of the public characteristics of the giant LED display as people would see it while walking down the street. So we came up with the public media art of the waves for everyone."

"Starry Beach" is the first artwork presented under the name of a'strict, presenting surreal scenery through art and technology.

"We launched this artist brand as a media art sub brand of the company. As far as I know, this is the first attempt to do so in Korea," Lee said. "D'strict is a design company and has been creating what the client wanted. While doing commercial projects, some of the products were appealing in the field of contemporary art in an era when the boundary between art and design is blurred. An artwork should touch the viewer's heart ― if we could provide visual, intuitive impression through media technology, it could be contemporary artwork too." 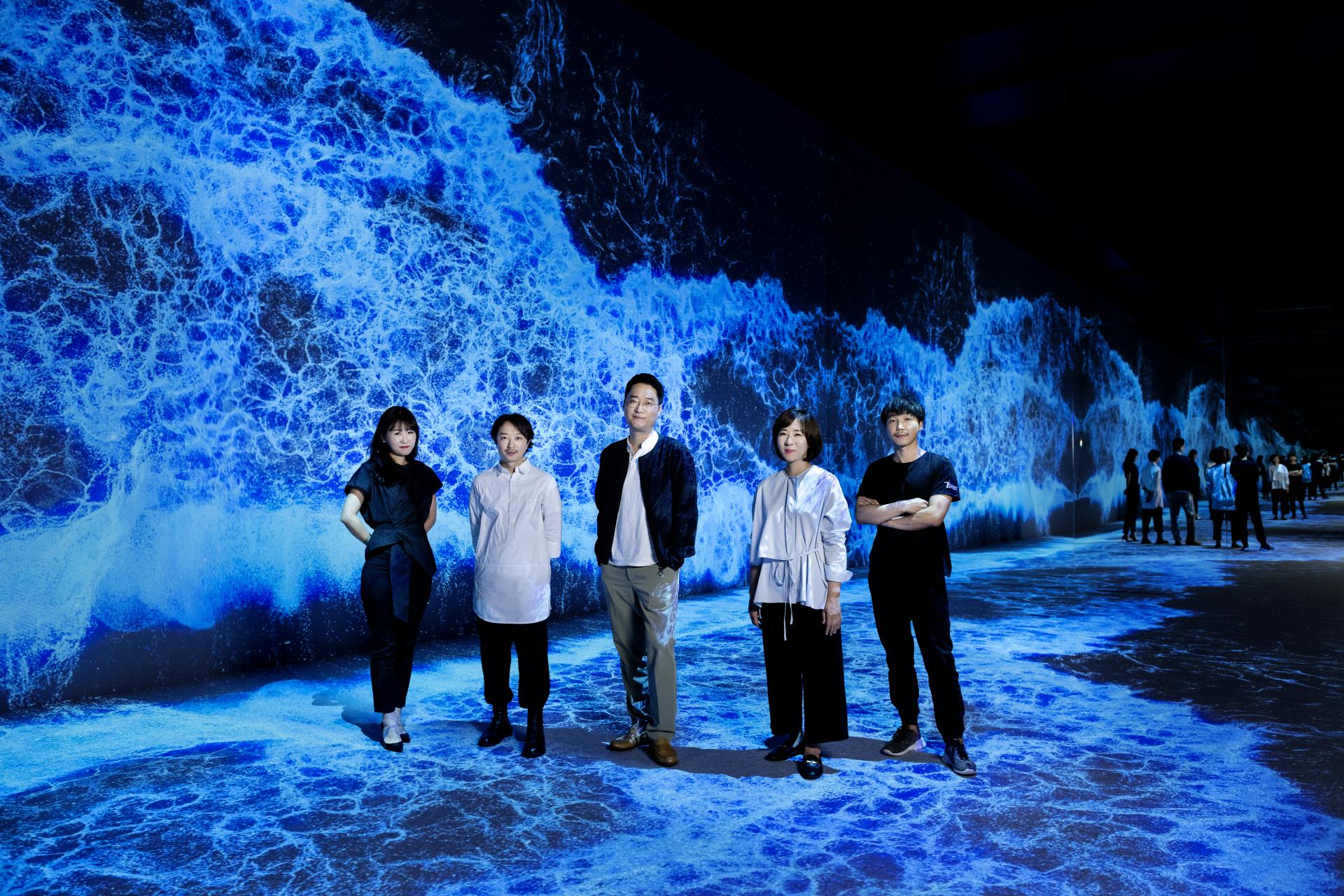 "Starry Beach" is also inspired by natural movements, similar to d'strict's hit project "WAVE," but in fact they are created by a totally different group of people.

"None of the creators who are in charge of Starry Beach took part in WAVE. Creators from different genres collaborated for about four months to complete Starry Beach," Lee said. "We tried to bring nature, which is the opposite of city, to urbanscape and that is why the two pieces are both about sea waves. We wanted people to enjoy the crashing waves in the middle of a city without going to the sea."

The waves were created by computer graphics, using a commercialized 3D graphic engine to re-create the physical movements of the wave.

"We wanted to capture the physicality of waves in as detailed a manner as possible. We modified the settings numerous times to portray the movements of crashing water particles and grains of sand accurately," Lee said.

As d'strict is open to the mix of art and technology to provide viewers with novel experiences, a'strict also operates in an unprecedented way.

"A'strict is an open art unit and any creator in d'strict can participate in a'strict if they are interested in a project. Even those who quit the company can still be part of a'strict," Lee explained. "D'strict will continue its commercial projects, but a'strict will overcome the limitations of our creators as they are not bound to clients' requests here."

D'strict will open the Arte Museum on Jeju Island in September, transforming an abandoned factory into Korea's largest immersive art exhibition hall. "We will provide an intense visual and audio experience under the theme of nature by installing our media art works," Lee said.

"The bold attempt to blur the boundaries between d'strict and a'strict is a noteworthy feat of experimentation that parallels d'strict's reputation as a company that transcends the parameters of art, design, and technology in order to explore the boundless potential of media. A'strict's debut solo exhibition will highlight the growing connection between design and art, catalyzing more public projects that generate a sense of community and place, ultimately signaling the birth of a new generation of media artists," the gallery said in a statement.

The exhibit runs through Sept. 27.